How To Word Wedding Invitations

by The Zola Team 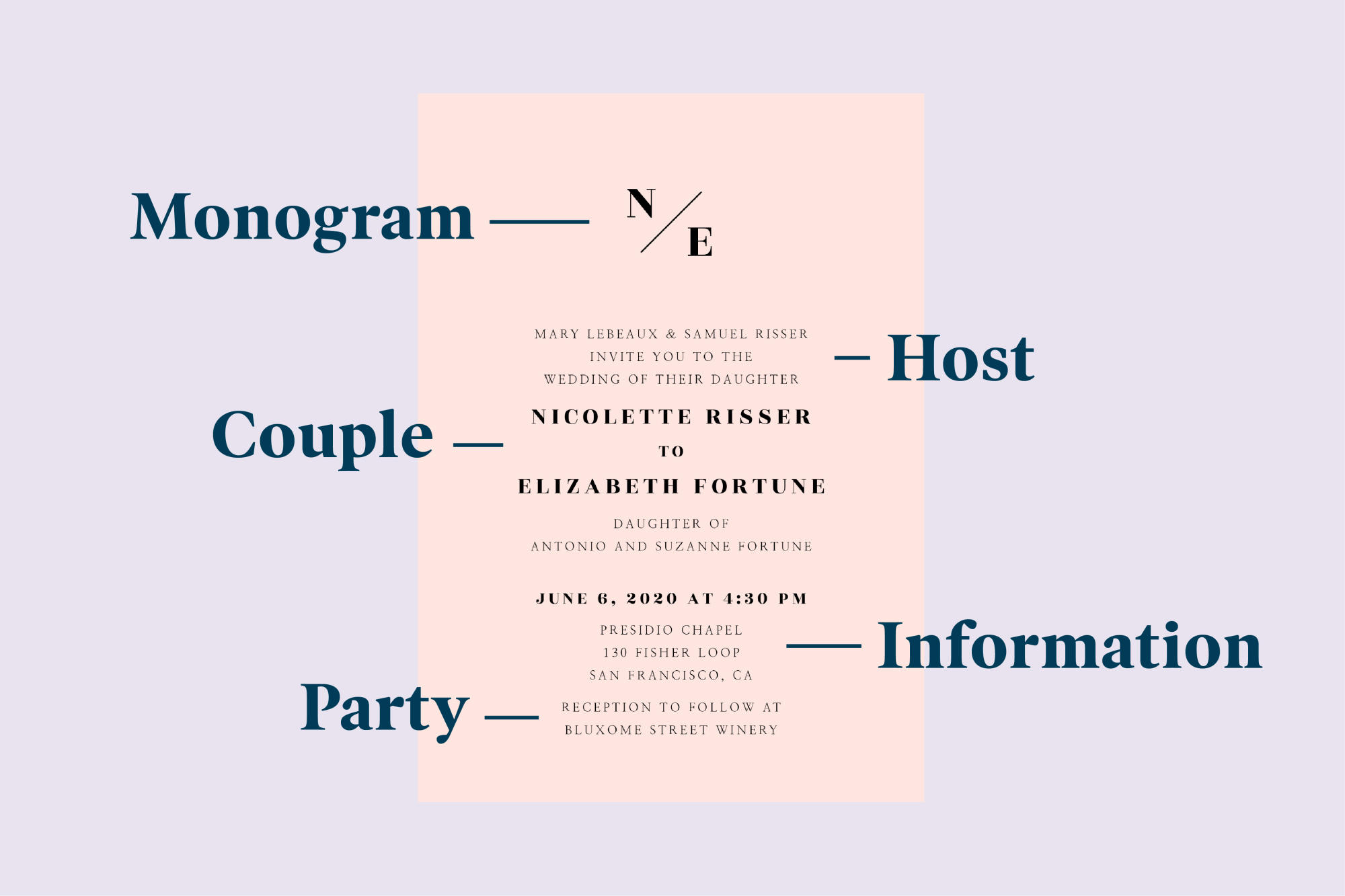 If you are writing your own invitations from scratch, this line-by-line wording template might come in handy as you fill out this piece of your wedding stationery. It outlines what information should appear, and in what order, on a traditional wedding invite. Once you understand the various components of invitation wording, feel free to get creative with your own personal touches and style, using the language that feels right for you and your partner.

Located at the very top of the invitation, the host line is where the name(s) of the event hosts appear. The hosts are typically the people who are paying for the wedding. Depending on who’s hosting, the wording will vary slightly: it could be one set of parents, both sets of parents, the couple and their parents together, or just the couple. Jump down to the Rules For Wedding Invitation Wording section for guidance on how to format names, and check out our invitation wording ideas, below.

Make sure you and your partner’s names are front and center. They may be placed high, low, or center depending on your invitation design, but make sure they are clearly legible. For heterosexual couples, the bride’s name traditionally comes before the groom’s. For same-sex couples, the wording of the host line may dictate who’s name comes first (i.e., if one set of parents is hosting, their names will come first and their child’s should follow). If you are hosting yourselves, then it’s up to you which name comes first.

The real meat of the invitation, the information section follows the couple’s names. It states the date of the wedding, where the ceremony and reception are taking place, and the start time. Include the address of the wedding venue(s), unless your invitation design doesn’t allow room. You can also include information on dress code and how guests should RSVP (a wedding website, an email, and/or phone number and an RSVP deadline) if you forego a response card.

The party line comes at the end of the invitation and notifies guests of what’s scheduled to follow the marriage ceremony. Let your guests know what type of wedding reception they should expect, whether it’s dinner and dancing, a light luncheon, or cocktails and canapes.

Wedding invitations, and how they are worded, are a topic that makes people nervous. What if you accidentally misspell a word, or leave out critical info? Or, worse yet, what if you don’t know the proper “rules” and end up committing a social faux pas? Never fear—we’ve put together a list of wedding invitation wording etiquette that will help you craft perfectly on-point invitations.

Note: We realize that every wedding is unique. You will have to decide as a couple what type of language feels right for your specific style. These etiquette “rules” are really more suggestions for the most traditional and formal invitation wording. If you are having an informal wedding, and/or prefer a more modern approach to your invitation design, then do whatever works for you and your style.

Etiquette for Names and Titles

Etiquette for Names and Titles of Divorced Parents

Etiquette for Names and Titles of Deceased Parents

Etiquette for Names and Titles of Same-Sex Parents

What To Write On Your Wedding Invitations

Mrs. and Mr. Michael Francis Middleton
request the honour of your company
at the marriage of their daughter
Catherine Elizabeth Middleton
to Prince William, Duke of Cambridge
Son of Charles, Prince of Wales and the late Diana, Princess of Wales
Friday, the twenty-ninth of April
two thousand and eleven
at eleven o’clock in the morning
at Westminster Abbey – 20, Deans Yard
London, England
Reception to follow

Amal Alamuddin and George Timothy Clooney
request the pleasure of your company
at the celebration of their marriage
Saturday, 27 September 2014
at noon
Aman Canal Grande Hotel in Venice, Italy
Festivities to follow

Mr. Angiolo Guiseppe and Mrs. Elettra Rossellini
invite you to share in the joy
of marriage uniting their son
Roberto Rossellini
to
Ingrid Bergman
Daughter of the late Mr. Justis and Mrs. Friedel Bergman
Saturday, the twenty-fourth of May
nineteen fifty
at noon
Hotel Boca Chica, Acapulco, Mexico
Dinner and merriment to follow

Neil Patrick Harris and David Michael Burtka
cordially invite you to their wedding celebration
Saturday the sixth of September
two thousand and fourteen
at one o’clock in the afternoon
An anonymous castle in Perugia, Italy
Reception to follow

Together with their families,
Malaak Compton,
daughter of Gerald and Louisa Compton,
and
Christopher Rock,
son of the late Julius Rock and Rosalie Rock,
invite you to share in their wedding festivities
November twenty-third, nineteen ninety six
at eight o’clock in the evening
The Estate at Florentine Gardens
97 Rivervale Road
River Vale, New Jersey
Dinner reception to follow

Casual, Both Sets of Parents Hosting

With great pleasure
Kimberly and Jonathan Biel
and Lynn Bomar Harless and Randall Timberlake
invite you to celebrate the marriage of their children
Jessica and Justin
October 19, 2012
at four o’clock in the afternoon
Borgo Egnazia Resort
72015 Savelletri di Fasano BR, Italy
RSVP by August 31
(555) 555-5555
Dress as you wish, dine as you like, dance as you please

Ellen DeGeneres and Portia De Rossi
invite you to share in their wedding festivities
Saturday, August 16 2008
At the residence of
Beverly Hills, California
Dinner, dancing, and merriment to follow

Browse Zola's Invites + Paper designs. You can even order sample wedding invitations to get a feel for the, well, feel ahead of making your invites. Stay on top of your planning with our suite of Wedding Planning Tools.