Who Should Walk Me Down the Aisle? 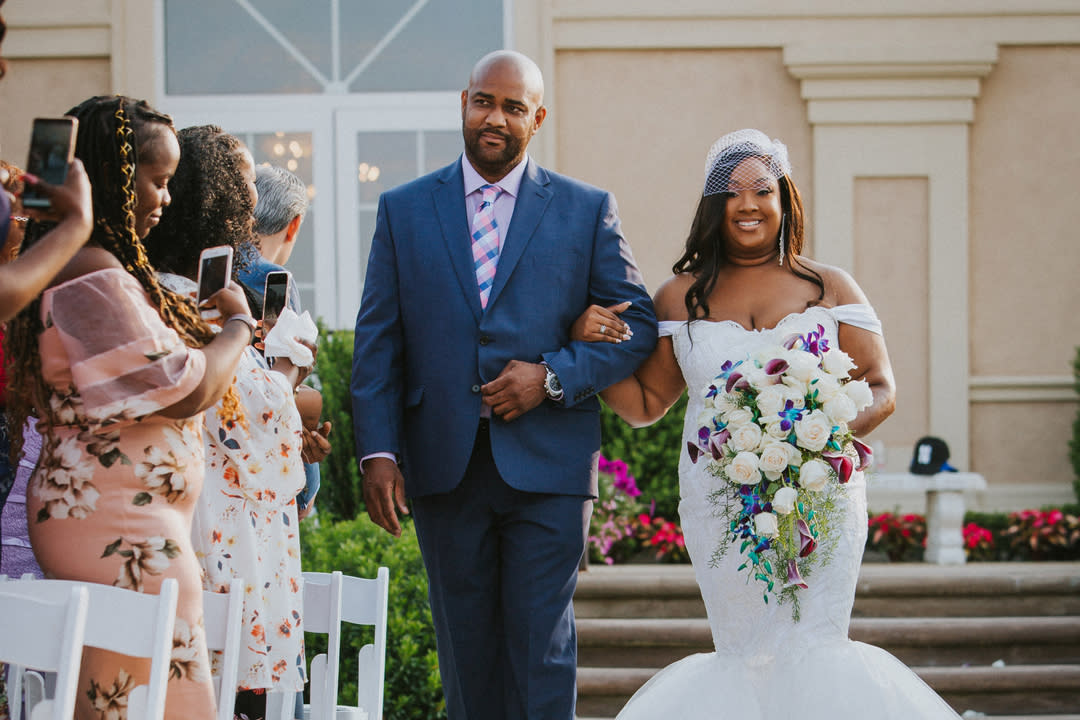 If your wedding ceremony includes a traditional aisle set up, then you’re likely faced with the decision of who, if anyone, should walk you down the aisle. A wedding ceremony aisle procession is common in many cultures, and, of course, quite prevalent in mainstream media. “Here comes the bride…” ring any bells? If you do choose to be escorted down the aisle, who you choose to do the honor is completely up to you. Here are some traditional options, as well as advice on how to choose who should walk you down the aisle.

Why does anyone walk anyone down the aisle?

The processional order—or the sequence in which the wedding party and their families head down the aisle—is often an important moment for the wedding ceremony. After months of preparation, it’s the bride and groom’s big debut.

The decision to have an aisle escort is often determined by what kind of ceremony you’re having and the traditions and cultures you and your SO are contributing to the wedding. Here’s a brief history of who walks the bride and groom down the aisle in a variety of traditional ceremonies. 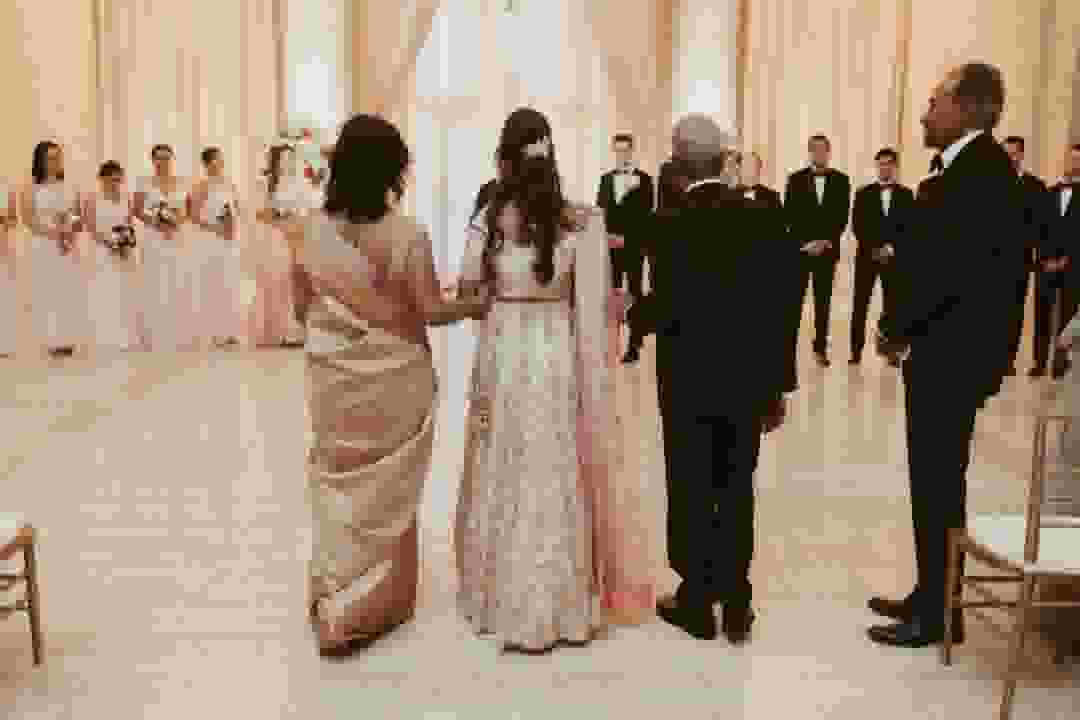 In a Catholic ceremony, the groom typically walks down the aisle alone or with the officiant and the best man. This way, he’s already standing at the altar awaiting his bride. After the rest of the wedding party and the ring bearer/flower girl head down, the bride is escorted down the aisle by her father. This is typically understood to mean her father is “giving her away.” This tradition of transferring the bride to another family may stem from the property-like ownership men had over women in medieval times in England.

In a Jewish ceremony, both the bride and groom are escorted down the aisle by their respective parents to the chuppah, where they will exchange vows. Sometimes the parents join them in the chuppah with the rabbi.

Hindu weddings traditionally last at least three days, with the last day being the official formal wedding. The baraat, or the groom’s arrival, traditionally includes him being escorted by his family and entering on a beautifully decorated horse to greet the bride’s parents. There offers them gifts. The elders then escort him to the mandap, or an altar made of four pillars that represents the four in-laws, where he is slated to meet the bride. The bride enters the mandap escorted by her uncle.

A Muslim wedding also takes place over several days. The Mehendi ceremony, which is the first night of the three-day wedding, is the most colorful and festive, including henna and loud songs. The bride, whose arms and sometimes feet are decorated with henna, is veiled by a yellow dupatta, or large scarf, that is held by six female family members or friends. In some cases, the groom enters after the bride. His side of the wedding plays loud songs while he greets his bride.

A ceremony without religious connotation typically has loose expectations when it comes to how the bride and groom make their entrance. Maybe you want your grandparents to escort you or perhaps your sister. Maybe you’d like to make the trek down the aisle totally alone or with your beloved dog. It could involve a combination of certain traditions or it could be a chance for you to come up with your own! After all, it is your wedding.

How To Decide Who Should Walk You Down The Aisle

If your procession isn’t predetermined by traditional ceremony expectations, or if you and your family don’t mind bending that tradition a bit, then the choice is yours. It might feel overwhelming to decide, though. So here’s how to navigate the decision.

Make it a point to sit down with your SO and discuss who will walk you both down the aisle during the wedding planning. It’s important that you let each other know of any traditions you’d like to keep and traditions you wouldn’t mind breaking. If your families are heavily involved in the wedding planning then this might be a good conversation to have with them, as well, since someone may be expecting to do the honors. 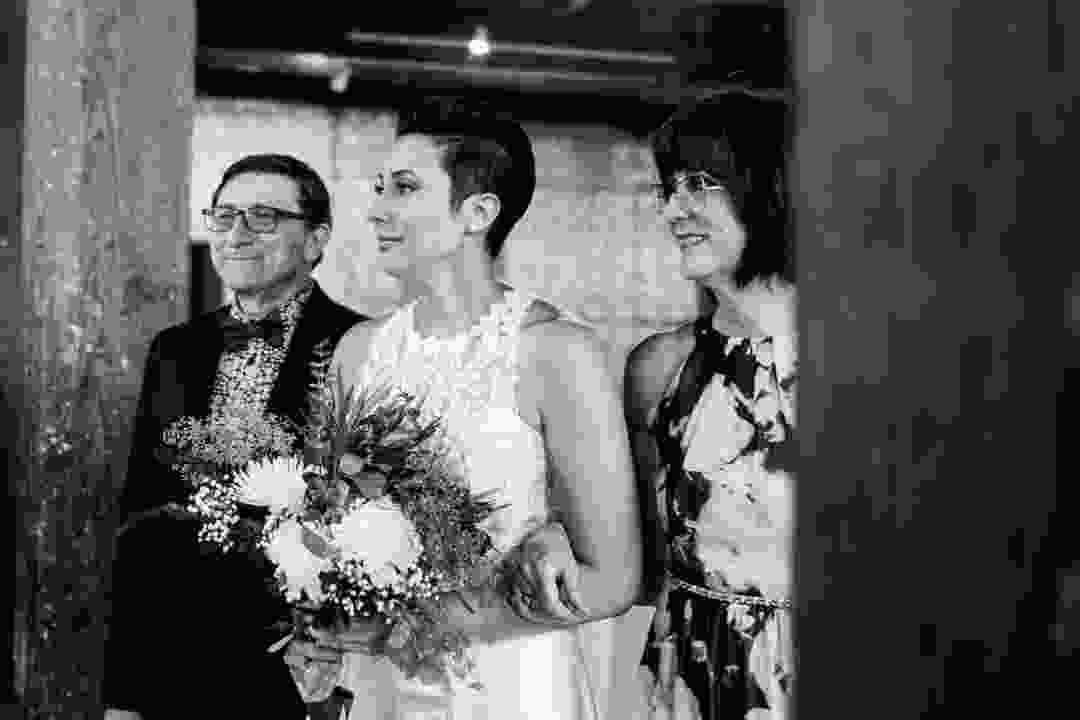 If you do want to be escorted down the aisle but can’t decide on who to pick—like maybe between biological and stepparents—then make a list of all the potential escorts. This can help your brain sort out who you’re dealing with and what your options are. If you’re struggling to come up with the list or refine it, focus on who makes you feel most comfortable. It’s an intimate moment and your relationship with that person should reflect that.

Think outside of the box on this one! You aren’t limited to just one person doing the honors. Someone can walk you halfway and switch with someone else or you can be flanked on either side. For example, if you grew up with a single mother and are also close to your sister, you can ask both of them to escort you down the aisle. There really is no right or wrong combination when it comes to your entrance.

Let others know why.

Whatever you end up choosing, be sure to take initiative and let others know why you made the decision you did. This will help relieve any awkward tension, especially if someone was expecting to be chosen as your escort. Let them know it’s not personal, it’s just your preference. Although it may feel like you’re picking someone over the other, the reality is that there are other important parts of your wedding someone can participate in. Offer others reading positions or even ask them to say grace or make a toast at the reception.

Tradition asides, it's your choice who walks you down the aisle. Be open to as many options as you want and take the time to make a thoughtful decision.