Why Married Millennial Couples Are In Debt 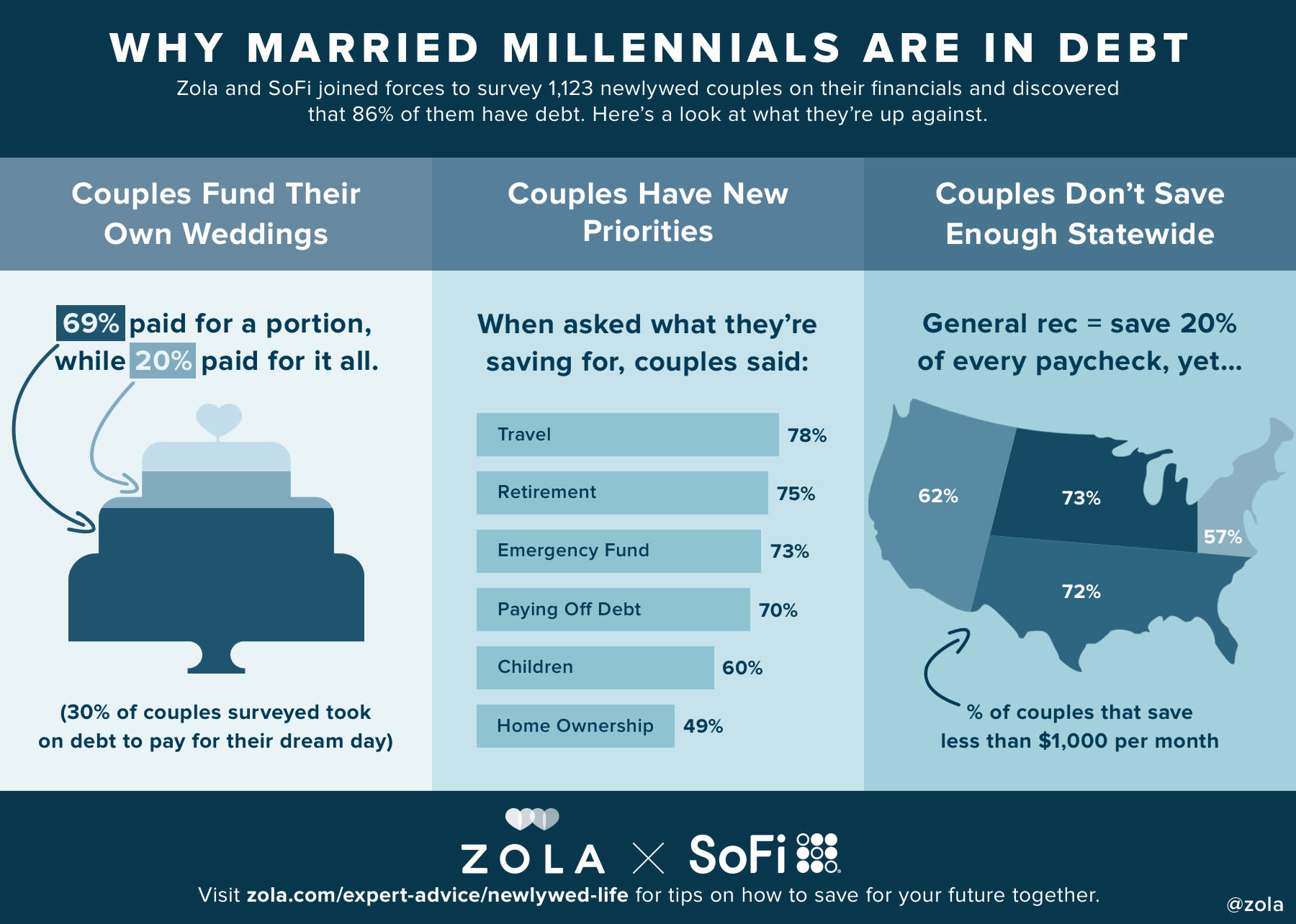 We know that the planning doesn’t stop after the wedding. When it comes to combining finances before and after marriage, there’s so much to navigate — from budget talk and combining bank accounts to paying debt, creating financial savings goals, credit, and beyond.

To dig into how newlyweds are paying for their nuptials and combining finances during their first years of marriage, Zola joined forces with SoFi, a personal finance company helping its members achieve financial independence to realize their ambitions, and together we surveyed 1,123 recently married couples about marriage and money.

The great news? Money is no longer a taboo relationship topic. The vast majority of couples know absolutely everything about each other’s financials and budget habits before tying the knot. 84% also said they feel extremely comfortable talking about money with their spouse.

Our survey also revealed that 98% of newlyweds are saving, however priorities are shifting. Today, the #1 newlywed savings goal is travel, followed by (in order) retirement, emergency funds, paying off debt, children, and buying a home.

Read on for more insights into all-things newlywed finances. Then, click here to read more about how couples are merging their finances with SoFi and Zola, and to register for SoFi services!

Budgeting For The Wedding

Even though weddings are getting more and more expensive, couples are determined to pay for their dream day. Our survey revealed that only 11% of couples did not contribute to their wedding budget vs. 20% who covered the cost entirely.

72% of couples also reported changing their spending habits in order to afford the big day. How did they cut back? · 61% cut back on leisure activities · 31% cut back on travel · 16% reduced their savings goals such as lowering their 401k contribution · 8% moved to a more affordable apartment · 5% deferred loan payments like student loans

Brian Walsh, SoFi’s manager of financial planning and CFP®, recommends not getting into debt if it can be avoided. “The simple fact is that debt has been linked to increased anxiety, reduced satisfaction and tougher adjustment to married life. Knowing that, you need to ask yourself if going into debt is really worth it? As a financial planner, my advice would be a hard no, but as someone who is married, my answer is that it is much more complicated.”

What’s Yours Is Mine (Even Debt)

When it comes to getting married, millennial couples are committing to both lifelong love and joint finances.

86% of newlywed couples are entering their marriage with debt, and instead of putting the onus on the partner bringing it into the relationship, couples are partnering to pay it off.

Plus, 72% of newly married couples do have at least one joint bank account. And, 58% are splitting every bill 50/50 or paying from a joint account.

The number-one reason why couples have not created a joint account? Because the process seems overwhelming. But, it doesn’t have to be.

Even though we were impressed that 98% of couples are saving money together, the truth is that couples are not saving enough. Many sources recommend that couples save 20% of their annual income, but our survey found that regardless of where newly-married couples live or what they earn, the majority are saving much less..

Why aren’t couples saving more? Many survey respondents told us that they are currently focused on paying down their debt, but have plans to up their savings contribution in the near future. However you plan on saving, we support it 100%.