Weddings are joyous occasions: celebrations of love, of family, and of life. Part of what makes weddings so magnificent is their individual uniqueness. No two weddings are the same, so each wedding you attend teaches you something new about what a wedding can be.

With that in mind, there are some things that transcend all, or at least most, wedding ceremonies. This guide will walk you through what to expect, or plan for, in the traditional wedding ceremony order of events, plus offer various cultural contexts and alternative considerations.

The tradition of weddings in the US is heavily informed by Judeo-Christian wedding rites. Many weddings follow the basic structure of this tradition, regardless of the religious identity or practices (or lack thereof) of the spouses-to-be. Even if neither the couple nor the ceremony are religious, this traditional wedding ceremony order offers room for interpretation.

This is the very beginning of the ceremony. The spouses-to-be, along with their wedding party, make a grand entrance into the venue.

The traditional procession walks down the aisle in this order:

It’s important to note that by “traditional,” we mean it’s commonly seen and has been commonly practiced throughout the ages of weddings. However, that’s not to say it has to go in this order.

There are many variations on the procession, and the entire ceremony, across different cultures. For instance, in a traditional Jewish wedding ceremony, both parents of the bride act as her escort, and the grandparents of both spouses-to-be are also featured before the groomsmen and bridesmaids.

In addition to cultural considerations, the general structure outlined above is often tailored to the individual realities and desires of any given couple. To that effect, common modifications to the traditional order include:

Whatever form it takes, as the processional comes to a close, the ceremony proper begins. 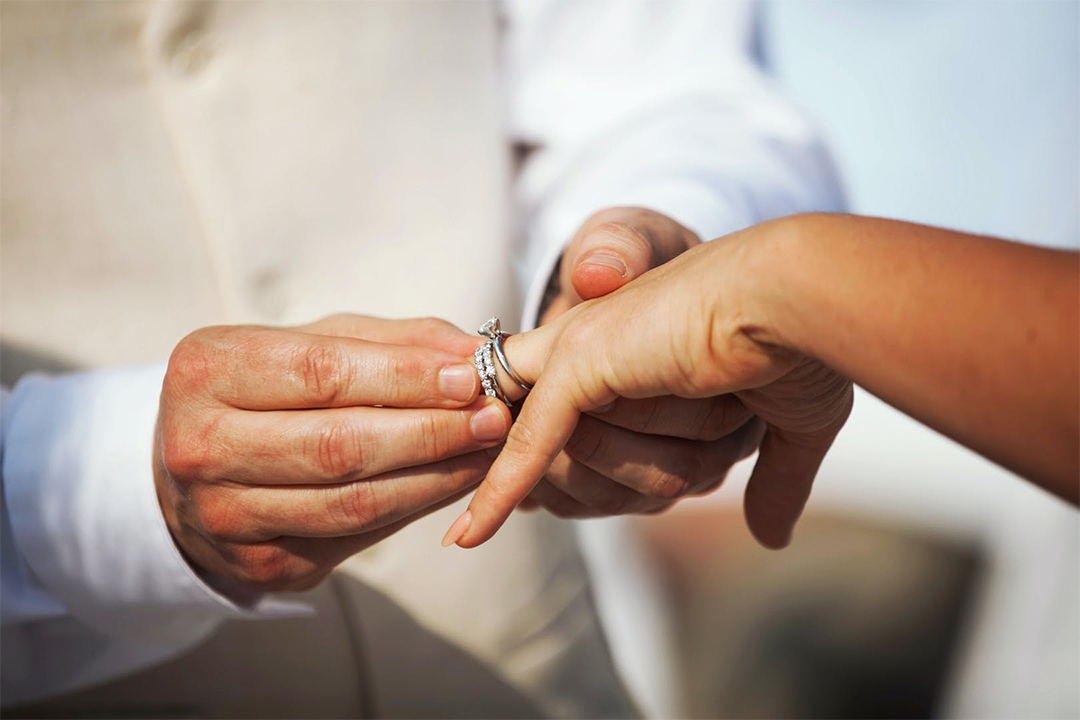 This is the main event of the day. All the most significant events happen: the couple’s love is honored, the binding words are said, the vital exchanges are made, and, most importantly, the partners who had entered unmarried officially become newlyweds.

The order of wedding ceremony events begins, generally, with some introductory opening remarks.

To begin, the officiant welcomes all parties and speaks about love and marriage, in general, and then about the marrying couple and ceremony.

Depending on how well the officiant knows the couple, he or she may spend time talking about how the couple met each other, how their love has grown over time, or anything else about them personally and/or as a couple. The officiant may also talk about the future, previewing what marriage will mean and require of both spouses-to-be. These remarks may take a purely serious tone or strike a more lighthearted register, depending on what the couple decides.

After these remarks, the officiant traditionally cedes the floor to the family and friends of the couple for readings.

In this segment, one or more members of the joint families addresses the crowd with readings, speeches, or other forms of oratory. The speakers may read from existing sources, prepare their own speeches, or do a bit of both.

Readings draw from a range of sources, including:

When the readers are finished, it’s time for the guests of honor to do their part.

Now, it’s time for the spouses-to-be to recite their vows to each other and exchange rings.

There are traditional wedding vows available for couples to use or adapt, and they also have the option to compose their own vows. In any case, both partners proclaim their love for each other and promise to keep and grow that love into the future.

Then, each spouse-to-be places a wedding band on the other’s finger. Traditionally, each partner says “With this ring, I thee wed,” and then the groom places the ring on the bride’s finger, followed by the bride placing a ring on the groom’s finger. 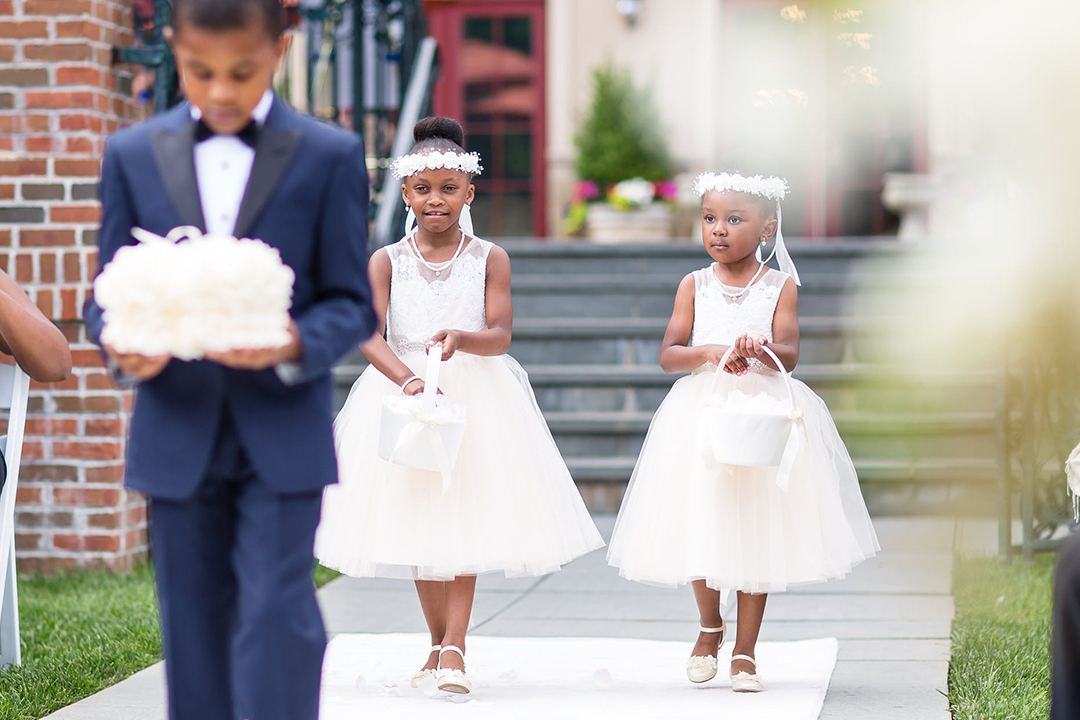 Pronouncement and the Kiss

This is where the officiant says the words that make the marriage official, a form of “I now pronounce you partners for life,” followed by the phrase that everyone is waiting for, “You may kiss the bride” (or some variation thereof).

And the sparks fly.

The kiss between manifests bodily what the officiant’s pronouncement makes legal—the spouses-to-be are now spouses, proper.

In addition to the kiss, some couples also celebrate an additional unity ceremony, another practice that symbolizes their love for each other on their wedding day. Some of these have cultural roots, such as:

Other unity rituals have less to do with cultural background than individuality, and are born out of couples’ own interests. For instance, couples can share actions like:

With the couple officially and symbolically unified, the ceremony is ready to end.

After the kiss and any additional unity rituals, the ceremony is ready to come to an end. To that effect, the officiant will close out the celebration with some words of wisdom. In a religious ceremony, this may include a blessing or prayer.

In any case, there’s only one thing left, the grand exit.

The institution of marriage and the celebration thereof—the wedding—transcend all cultures and societies. The sections above detailed just a few ways in which different cultural traditions differ in the wedding order of events. Here are some other big variations:

As noted above, Jewish weddings feature a slightly different procession, as well as the unity ritual of breaking the glass. Beyond those differences, another thing that stands out about Jewish weddings is that the ceremony takes place under a canopy called a chuppah.

You might have heard that Indian weddings are elaborate affairs, lasting anywhere up to a week, which is absolutely true. Indian wedding ceremonies are so complex that one paragraph can’t simply do them justice. Some highlights of what to expect, include:

In traditional Chinese culture, a singular ceremony is not the focal point of the wedding. Wedding rites emphasize practices at each partner’s home, such as meals, games, and costume changes (brides wear not just one dress, but multiple).

Beyond national, regional, religious, and other large-scale cultures, couples from various and intersecting microcultures are constantly evolving what a wedding can look like. From weddings that integrate trades, to themes from novels or TV shows, and even performative, Broadway-eque affairs, the list goes on.

The order of wedding ceremony events is ultimately up to the spouses-to-be. What they choose, as much as anything else, is an emblem of their love.

Love Is What Transcends

It can’t be said enough, every wedding is unique and marvelous in its own right. Regardless of the order of wedding ceremony events, or extent to which it follows or strays from tradition, every wedding is a wondrous celebration of love. Each is a joining of two persons, and of two families, that changes the face of the earth.

The thing that transcends all kinds of ceremonies is what organizes not just the wedding, but the marriage—love.

If these have sparked new ideas for your own wedding ceremony, why not bring your ideas to life? Our team at Zola is ready to support you and your spouse-to-be on this magical journey of love. Reach out if you have any questions.